Considered one of the main global events for the stone and machinery segment, Shuitou Stone Fair China attracts more than 45 000 visitors each year. In 2015 Afghan Morvarid Stone Mining Company was the first company from Afghanistan to invest in being present at the stone fair.

In line with its vision to expand globally and showcase the premium quality marble products that Afghanistan has to offer, AMSMC embarked on entering the Chinese construction market in 2015. Shuitou stone fair was its first important milestone and it was very important that this first impression on the Chinese contractors was a lasting one. With a premium white open stand to allow all visitors easy access to view and feel the natural marble, as well as artistic designs etched into the marble slabs, the company achieved its goal.

One of the main attractions in the Shuitou Stone Fair, AMSMC’s products stood out from the crowd not only because the whole stand was created out of premium white marble directly from its quarry, but also because of the exquisite bookmatch marble slabs displayed on the walls.

Over 15 000 visitors approached the stand and reviewed the material as well as the company profile. More than 1500 sales enquiries were taken at the show and 25 large scale contracts were signed on the stand. A great success for the company’s first exhibition in China. Come and visit AMSMC who will be participating in the Xiamen Stone Fair in March 2015. 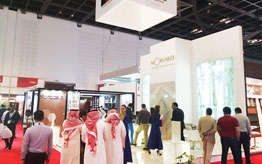 The Middle East’s largest stone exhibition, Big 5 Dubai was held on the 23- 26 November 2015. Attracting visitors across the region and the world, the exhibition is an important stepping stone into the Middle East natural stone market. AMSMC participated as the first Afghanistan company to ever showcase their products at Big 5 Dubai.

80 000 visitors made their way through the many halls at the Dubai World Trade Center over the 4 days of the show. Amongst the 3000 exhibitors was Afghan Morvarid Stone Mining Company, there to showcase their impressive quarry hidden between the mountains of the Chesht-e-sharif region in Herat Afghanistan.

At first approach the AMSMC stand was impressive with the whole stand covered with precious natural white marble. A rare and unique feature was the artistic etched slabs on the wall, where creative designs were carved into white marble slabs and lit from the back to create a halo effect. Along the center a raised catwalk led you to the reception desk where the sales staff were ready to welcome visitors.

AMSMC is a first of its kind to showcase the marble products that Afghanistan has to offer beyond its borders. With its own quarry and state of the art Gaspari Menotti machinery imported from Italy, the company is geared to make a positive impact on the industry as well as in Afghanistan. 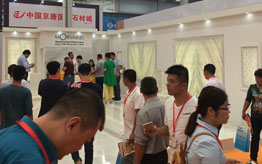 Continuing from the success of Shuitou Stone Fair in 2015, Afghan Morvarid Stone Mining Company will be participating in the worlds largest stone exhibition. Xiamen Stone Fair will be taking place from the 6th to the 9th March 2016 in China. The exhibition is set to welcome even more visitors and exhibitors than ever before. Attracting buyers and construction companies from around the world, Xiamen Stone Fair is by far the largest and most prestigious stone fair in Asia.

AMSMC will be participating in Xiamen this year with a stand double the size of the Shuitou exhibition. It will surely be a great sight not to be missed with even more white marble, artistic designs and large slabs covering the walls and floor for the stand.

The stigma: Mining has always been synonymous with destruction, leaving villages in their dust to re-build what once was beautiful.

The solution: Morvarid, Afghanistans leading marble and stone mining company has developed a solution. Combining Morvarid knowledge, technical expertise and know-how with the needs, aspirations and drive of local villages, has set villages of Afghanistan on a path of success.

The first of its kind, Morvarid Surface mining project with local villages gives the training and technical support needed for the villages to have a sustainable income. Requiring minimal tools and water and without the need for electricity, the Morvarid Surface Mining Project is providing a much needed alternative to the employment crisis in Afghanistan.

State of the art Italian Gaspari Menotti equipment at AMSMC

State of the art Italian Gaspari Menotti equipment at AMSMC